Charlie Cochrane was the Secretary of the Council of Civil Service Unions until his retirement in 2010. He is now the joint Chair of the Civil Service Appeal Board. He also acts as a trustee of two occupational pension schemes and of a charity operating a major leisure centre, and is a national executive member of the Civil Service Pensioners Alliance.

Ray retired from the Civil Service in 2006, his 32 years ending as Chief Welfare Officer in the Lord Chancellor's Department. Previously he spent three years seconded to the Charity for Civil Servants as Director of their Help and Advisory Services. He remains active in a range of roles within grant-making and other charities with Civil Service connections. 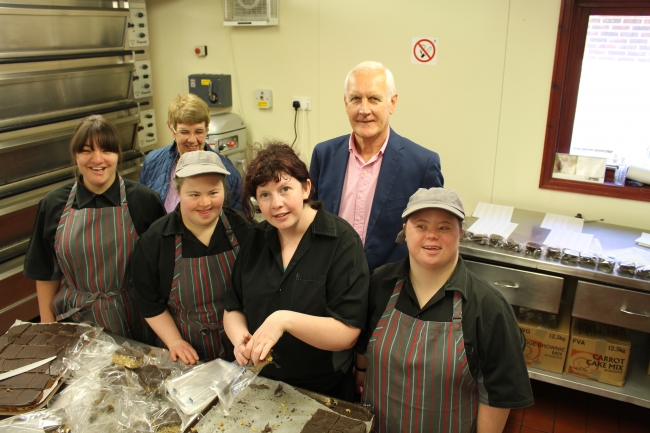 Visiting one of our beneficiary charities.  Gill Noble and Chris Furlong saw for themselves the important work of Canterbury Oast Trust in their kitchens.

Rebecca trained as an accountant (CIMA) and internal auditor with the Department for Work and Pensions. She has undertaken various finance, governance and audit roles, such as leading the audit function the Office of the Pensions Ombudsman and implementing the Banking & Accounting function for the 2012 Child Maintenance Scheme. She currently leads on finance and benefits for projects in HMRC Debt Management. She is a past president of her local CIMA branch and enjoys playing dek hockey in her spare time .

Gaby has spent more than 20 years in Consulting for Financial Services. As Executive Partner at IBM Gaby was driving clients' corporate innovation agenda including Artificial Intelligence, Big Data Analytics, Robotics and Blockchain. Gaby has voluntary work experience, most recently as a Trustee and Treasurer for the Homeless charity Groundswell.

Ian recently retired from DWP, where he had worked in a number of roles since 1981, both providing front line services and in policy development, most recently taking a leading role in the development and promotion of Credit Unions.  Ian was a member of the Public & Commercial Services union (PCS) National Executive Committee (NEC) from 1989 to 2018.  He was a founding employee member/Director of the Civil Service Pensions Board and a Trustee of both of the PCS pension funds.  He served as a Trustee of the Civil Service Retirement Fellowship for three years until 2017, he has been a Governor of his local primary school for many years, and he was elected a District Councillor in May 2016.  More recently, he became a Director of the Black Squirrel Credit Union which works with social landlords, providing ethical loans, especially to new tenants, and promoting the habit of saving for the future.

Sally spent 20 years in HR before moving to a 12-year role in welfare/Occupational Health at The National Archives. Her charity experience includes roles with IET Connect, Maytree and St. Mungo’s. Sally joined the board of the Institute of Welfare in 2004 retiring in 2015 from her role as Chair/Editor of Welfare World. Currently she is a freelance writer on health and welfare issues.

Kevin began his career in the insurance industry with Commercial Union Assurance in 1974. He joined the Bishops plc board in 1989 as Commercial Insurance Broking Director and took up the post of Chief Executive of the Civil Service Insurance Society in 2005 and became a Trustee of the Charity Fund at the same time. He has overseen the delivery of more than £8,600,000 in donations to the CSIS Charity Fund. Kevin resigned as a trustee in 2020 to take up the post of Charity Secretary.

Tunde works in tax policy at HMRC.  He is responsible for business tax reliefs which cost the UK billions every year.  Outside the 'day job' he has a wide range of experience: from volunteering as a special police constable to working with many other charities.  He is a local councillor, first elected in 2004, and in that capacity he held a number of portfolios including Deputy Mayor.  Tunde is married, has two children and lives in Essex.

Angelos is a Chartered Financial Analyst (CFA) and works at ERM, a London-based environmental services organisation, where he is responsible for investments in technology-enabled companies. Over the last 13 years, he has held a number of principal investment roles within the private sector, including more than three years with a private equity firm. He was also a Director of a software company for 18 months and a primary school governor for 12 months. Outside of his professional life, Angelos is married to a primary school teacher.

Sun-Hee is an international capital markets lawyer with over 20 years of experience. She is senior counsel at the European Bank for Reconstruction and Development (“EBRD”), a multilateral development bank headquartered in London, where she provides legal support to their Finance Department. The daughter of a diplomat, Sun-Hee received an international education before graduating in law from Cambridge University. She has worked for Linklaters, Salomon Brothers and Citigroup and she is currently a steering committee member of “EBRDconnect”, EBRD’s internal network promoting gender equality.

Debbie spent over 30 years working for BT plc, primarily in human resources. After retiring she managed an independent charity, the BT Benevolent Fund, for almost 11 years. She is also on the board of EnviroAbility, a Herefordshire-based charity which promotes projects which benefit disadvantaged groups of people, the community and the environment, and is a trustee of the Post Office Remembrance Fellowship, a grant-making charity. She is widowed with one daughter, and lives in Monmouth.

Colin started his career in the insurance industry 1967 with the Royal Insurance Company in Leicester and after a brief spell with an insurance broker in Birmingham, joined Commercial Union in 1980. In 1999, he took up a position with Towergate Insurance Group, and became Managing Director of a number of companies within the Group, before becoming part of their mergers and acquisitions team. He joined CSIS as a Non-Executive Director in 2008, stepping down at the end of 2020 and moving over to be a Trustee of the Charity at the same time.

Mary managed the Rowland Hill Fund, Royal Mail’s in-house charity for 11 years before retiring in August 2020. She developed brand awareness, fundraising and communication strategies to engage with colleagues and pensioners in Royal Mail and Post Office Ltd.She has previously worked as a behavioural analyst for a research company and worked for Dixons Carphone in Human Resources. She is a keen advocate of the charity sector and the support it gives. Mary is married with two children and two grandchildren.